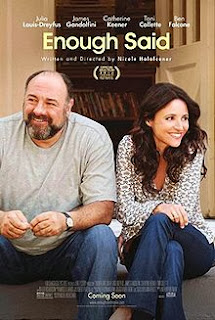 The reason I usually avoid comedies with romantic elements (not romantic comedies) is that the lead characters are always in their twenties or thirties. Maybe it's just a way to connect with the target audience (I myself am 20), but I find it annoying after a while.

That is why Nicole Holofcener's Enough Said stands out. Why? Because the lead characters are in their fifties when they're fully aware of life's hardships, not twentysomethings practically starting their lives. The leads in Enough Said are divorcees and have their kids heading off to college. How often do you see that in a film?

The female star of Enough Said is Julia Louis-Dreyfus, a familiar face to regular TV viewers. Of course anyone who's seen Seinfeld or Veep knows that she can do comedy. (After all, she has four Emmys just for comedy.) But Louis-Dreyfus plays Eva in a different way than she does with Elaine Benes or Selina Meyer; she makes Eva human.

The male star of Enough Said is the late James Gandolfini, another familiar face to regular TV viewers. It sounds strange to see Tony Soprano in a much lighter role, but Gandolfini proves he's very much capable doing something outside of the gangster role. It's a shame he passed away earlier this year. This film showed he was just getting started.

If I couldn't make it any more clear, I just adored Enough Said. It feels like a very natural film, nothing about it felt artificial. Thanks to the performances from Louis-Dreyfus and Gandolfini, Enough Said is an endearing little film that I hope many people will seek out.

My Rating: *****
Posted by MovieNut14 at 11:09:00 PM
Email ThisBlogThis!Share to TwitterShare to FacebookShare to Pinterest
Labels: 2010s, directed by women, movies, reviews