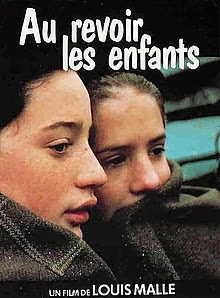 Stories told through the eyes of a child are bound to be more heartbreaking. How so? This is because (at least most of the time) they are unaware of the world around them. (Don't believe me? Go read or watch To Kill a Mockingbird.)

And this is the viewpoint that Louis Malle's Au revoir les enfants is told from. Semi-based on an event in Malle's own life, the film depicts a time of war through the eyes of innocents. (Many other films have tried to follow in Malle's footsteps but very few have succeeded.)

I think what makes Au revoir les enfants an interesting watch (the semi-autobiographical elements aside) is that the events of World War II are treated as simply a minor discussion starter. The film is mostly revolving around the personal dilemmas facing Julien (Gaspard Manesse): doing well in his classes, the occasional schoolboy crush, things of that nature.

What's also surprising about Au revoir les enfants is how bleak it is. But it's not the story that's bleak. It's how the film was shot. Renato Berta's cinematography shies away from vibrant colors and it always seems to be a cloudy day. It's a small detail that I simply love.