Love Me or Leave Me 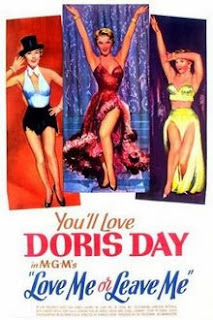 When Chicago gangster Martin "The Gimp" Snyder (James Cagney) first lays eyes on Ruth Etting (Doris Day) in Charles Vidor's Love Me or Leave Me, he's instantly drawn to her. And her initial attitude is a good match for his. She's not some airhead blonde; she's got determination coursing through her veins.

She longs to be a singer. Snyder gives her the opportunity for some small gigs, but that's simply not enough for Ruth. She wants the stage for herself. As time wears on, Ruth becomes famous not just on stage but on screen as well. But things get complicated between Snyder and Ruth. (Well, more complicated...)

Love Me or Leave Me features some amazing work from Cagney and Day. It's amusing to see Cagney do a film that managed to mesh the two genres he frequently did (the gangster picture and the musical). he again plays a gangster but not one with a hair-trigger temper like in The Public Enemy or White Heat. He plays a gangster that acts like a big shot but is anything but. (One character points out how Snyder's a force to be reckoned with in Chicago but a complete nobody anywhere else.)

Long before she made her famed romantic comedies with Rock Hudson, Day shows a brassy yet bold side to her acting. Her many musical numbers are mesmerizing, especially "Ten Cents a Dance". She most definitely holds her own against a screen presence like Cagney. (And this was a role considered for Ava Gardner or Jane Russell!) How she failed to snare an Oscar nomination is beyond me.

Love Me or Leave Me is certainly one of the lesser-known films of Hollywood's Golden Age and I don't understand why that is. It features one of Cagney's best performances and the performance of Day's career. And, quite simply, it's a fascinating story to watch.