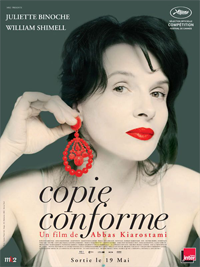 There's something magical about two people meeting for the first time. As they spend more time with each other, they may realize that they were meant to be.

Abbas Kiarostami's Certified Copy depicts such an occurrence beautifully. Not being familiar with Kiarostami, I wasn't aware of what he was capable of. What I got is perhaps one of the best films of the last five years.

I also didn't really know the premise of the film until I started watching it. And it's a very lovely premise. I'll try not to give it away to those who haven't seen it yet. It is something better appreciated with little knowledge.

The stars of Certified Copy are Juliette Binoche and William Shimell, whom seem like odd choices. A French Oscar winner and a British opera singer in an Iranian director's film? Sounds strange, but Binoche and Shimell are actually perfect in their roles.

Certified Copy is one of those films that's practically impossible to get out of your mind once the credits start to roll. It's also one of those films that, in my eyes, proves that cinema is re-inventing itself rather than dying. It also got me intrigued as to what else Kiarostami has made. Hmm, A Taste of Cherry sounds good...

My Rating: *****
Posted by MovieNut14 at 11:45:00 PM
Email ThisBlogThis!Share to TwitterShare to FacebookShare to Pinterest
Labels: 2010s, movies, reviews