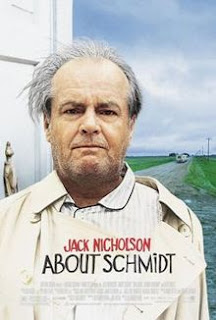 When you've reached your peak years, you're left wondering what's left to do. You've had a steady career, raised a family and a generally good life. So what's missing?

That's what's running through Warren Schmidt's (Jack Nicholson) mind early on in Alexander Payne's About Schmidt. Recently retired (and eventually widowed), he finds his life at a standstill. But with his daughter's wedding approaching, he tries to get some firm ground in his life.

Payne apparently has a tendency to depict men experiencing a personal crisis. (Other examples include Miles Raymond from Sideways and Matt King from The Descendants.) Then again, Payne does have a good reason for why he likes this particular role: "When I'm shooting I don't care who the star is. I have an actor playing a part, and I'm serving the script, not serving anyone's career. My hope is that, after twenty minutes, perhaps the audience forgets it's George Clooney or Jack Nicholson and just sees the character."

Speaking of Nicholson, he's great here. (But he usually is in most of the films he's in.) It's later career roles like that of Warren Schmidt that give me some hope for actors as they reach their twilight years.

All in all, I really liked About Schmidt. I didn't love it as much as Sideways or The Descendants, but I did admire Payne's writing and Nicholson's acting. It's worth a look.