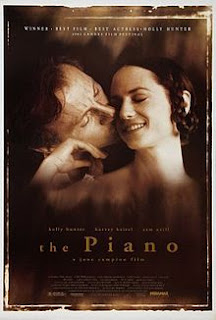 Ada McGrath (Holly Hunter), the protagonist of Jane Campion's The Piano, is a very compelling person to watch. She's a mute yet her expressions speak volumes. She's one of these people that has you wondering what makes her tick.

She doesn't express any negative feelings towards her arranged marriage to frontiersman Alistair Stewart (Sam Neill) nor towards the lack of affection within the relationship. (She does show a bit of resentment towards Alistair however.) Yet you wonder if there's even any hope for them.

Ada's daughter Flora (Anna Paquin) serves as a sort of translator for those around them. (It seems fitting since she can't shut up.) But even with this form of communication, the ties between Ada and Alistair only fray further. They simply don't know how to express themselves to each other.

Baines (Harvey Keitel) gives Ada the attention she never knew she wanted and Alistair the anger he never knew he had in him. Pay attention to the two scenes of intimacy between Baines and Ada. She is very reluctant at first, but she's very enthusiastic the second time. (It's also during the second encounter where Alistair realizes what his own wife is capable of.)

The Piano is a film where the many unfolding mysteries are not a bother but rather a blessing, especially to those who like that added detail. Hunter, Neill and Keitel are responsible for this very sordid tale, and they act it out wonderfully. And Campion has become a person of interest in my book.