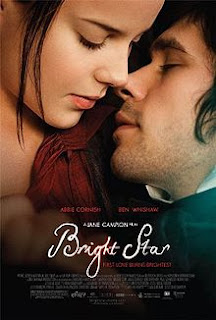 When it comes to relationships, communication is key. It's all about what to say and when to say it.

Communication is also the driving force for the romance between John Keats (Ben Whishaw) and Fanny Brawne (Abbie Cornish) in Jane Campion's Bright Star. (A stark contrast to the complete lack of communication in her earlier film The Piano.) Keats, of course, is one of the most famous poets in history, so a way with words is practically natural to him.

Prior to watching Bright Star, I was already fairly familiar with Keats' work. ("Ode to a Nightingale" is my personal favorite.) Thanks to the film, admirers of the poet can get a glimpse as to whom Keats was, and that was of a man devoted to the people he knew and loved.

The two stars of Bright Star are fantastic. Whishaw, whom I recently gotten acquainted with thanks to The Hour, displays a quiet sadness as Keats. Cornish does the same as Brawne but an air of curiosity and understanding as well. In short, two performances I'm sad to see not get any recognition, public or awards.

Bright Star is a very lovely film. Along with Whishaw and Cornish's performances and Campion's direction, the cinematography by Greig Fraser is gorgeous. (Fuck you, AMPAS, for both not nominating Bright Star and then proceed to give the award to Avatar.) I also love the many colorful dresses Cornish wears throughout the film. Oh, and the final scene is solid testimony as to why Bright Star is a film that should be seen by everyone.