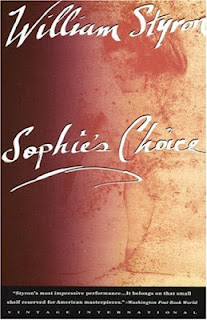 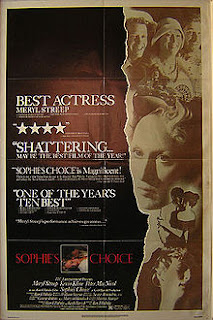 If there's one thing that's always bound to become an awards darling, it's fiction pertaining to the Holocaust. It seems like a sick joke that the worst cruelty towards mankind is fodder for media portrayals.

One such example is Sophie's Choice. Set a few years after World War II's demise, it chronicles the days of a survivor of that dreaded German affair. Her memories prevent her from leading a normal life in New York City. Who knows what haunts her mind?

William Styron's novel is a fascinating read but it does wade into melodramatic territory, mostly from Sophie's persistence on staying with her explosive lover Nathan. Still, Styron manages to squeeze out a few lovely passages. (Even if they are a bit soppy in places.)

Alan J. Pakula's film displays both the triumphs and failures of Styron's novel. Indeed Meryl Streep as Sophie is fantastic, but it's Kevin Kline who excels in his role as Nathan. He just embodied the role Styron originally wrote perfectly. (How did he not get any awards for his work?)

Both have obvious flaws, but both have their certain charms. The novel is more poetic whereas the film is easier to grasp. But being the type of woman not easily won over by melodrama, I wasn't too enthralled by either. God, now I have to make a choice. (Too much?)

What's worth checking out?: The movie.
Posted by MovieNut14 at 10:49:00 PM
Email ThisBlogThis!Share to TwitterShare to FacebookShare to Pinterest
Labels: book vs. movie, reviews