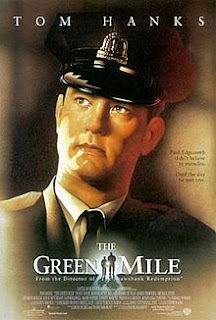 Frank Darabont's The Green Mile shares many elements with his earlier work The Shawshank Redemption. Both focus on life within the prison system, both are based on works by Stephen King, and both are very interesting stories told.

But both films are quite different. The Shawshank Redemption is told from the prisoners' perspective; The Green Mile is told from the point of view of guard Paul Edgecomb (Tom Hanks). However they show they show how horrendous life behind bars can be.

I think that's what makes Darabont so interesting. He takes King's work and goes through with it. (I haven't seen The Mist yet, so I can't say with complete certainty.) Still, it's interesting to watch.

The cast is pretty impressive. Along with Hanks, the roster includes David Morse, Barry Pepper, James Cromwell, Sam Rockwell, Patricia Clarkson and Harry Dean Stanton. The MVP of The Green Mile is, without a doubt, Michael Clarke Duncan. He gives such a heartbreaking performance, especially in light of recent news.

The Green Mile is just a fantastic film. It's a lovely character study as well. That last half hour or so is completely heartbreaking, no doubt about it. Oh, and I doubt I'll be able to watch Top Hat now without wanting to bawl my eyes out. Just saying.