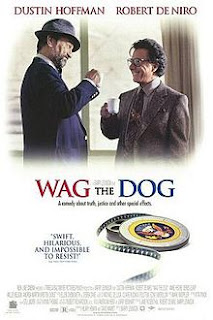 Boy, the things one does to maintain a reputation. Some will keep telling lies until it just escalates out of proportion. Others, if really desperate, will resort to murder.

Thankfully for Conrad Brean (Robert De Niro) and Winifred Ames (Anne Heche) of Barry Levinson's Wag the Dog, they resort to the former. Just days before the election, the President is caught up in a sex scandal. What do Conrad and Winifred do? Hire Hollywood producer Stanley Motss (Dustin Hoffman) to manufacture a fake war with Albania to distract the media.

Of course, such a scenario would be impossible to pull off today (the media;s more interested in people's sex lives than world events), but David Mamet and Hilary Henkin's script certainly provides an amusing "what if" situation. They're not afraid to show how gullible the mass population can be. (Hey, the internet churns out celebrity death hoaxes all the time.)

And Levinson enlists choice actors for his film. De Niro and Heche both try to keep the situation in order while at the same time silently panicking from the stress. Levinson also enlists the likes of Kirsten Dunst (as an actress hired for fake news footage) and Woody Harrelson (as a criminal posing as a war hero), and both make the most of their brief screentime. But it's Hoffman who owns the show.

Wag the Dog is a dark and clever little satire. Again, such a thing would be impossible to achieve in real life but then again, this was released not long before the Lewinsky scandal came to light...

My Rating: ****1/2
Posted by MovieNut14 at 11:11:00 AM
Email ThisBlogThis!Share to TwitterShare to FacebookShare to Pinterest
Labels: 1990s, movies, reviews