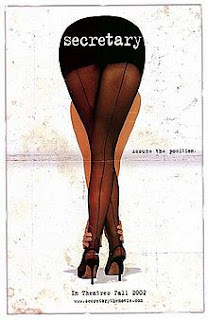 Sex. A good film just isn't complete without it, is it? Sometimes it's carnal, sometimes it's sensual. Either way, if there's too much of it, there's bound to be controversy.

Steven Shainberg's Secretary isn't any different. Though this particular film is different from others because it was daring enough to revolve around S&M, something most would find either too kinky or too risky for Hollywood to tackle. But Shainberg ensures that such a devious practice is in fact not that devious.

With not exactly wide-eyed innocence, Maggie Gyllenhaal plays the titular secretary Lee Holloway. (A sexy secretary named Holloway? Where have I heard that before?) Lee is clearly a damaged soul trying to find some meaning in her life. The way Gyllenhaal plays Lee is really hypnotic. Sometimes she's meek and mild, sometimes she's in charge of the situation. It's fascinating, really.

Likewise, the way James Spader plays E. Edward Grey is a stark contrast to Gyllenhaal as Lee. He's hesitant on acting out his kinky desires but his hesitation gradually weakens when he meets Lee. Even when does act on them, his guilt practically consumes him. And Spader makes Grey both a pitiless figure and a martyr.

Secretary is certainly different from other films willing to focus on sex, but that's of course a good thing. The film doesn't focus strictly on sex; it shows the possibility of two people with sexual psychoses being in a functioning relationship. You simply don't see that handled in a mature manner.

My Rating: ****1/2
Posted by MovieNut14 at 9:33:00 PM
Email ThisBlogThis!Share to TwitterShare to FacebookShare to Pinterest
Labels: 2000s, movies, reviews