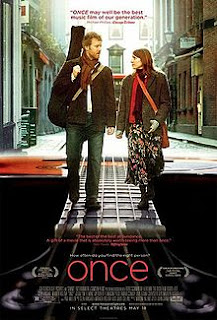 There have been a number of films that many people I know online absolutely love. Some of them I saw and thought were a bit overhyped. (I won't mention which ones.) Others I completely understood all of the love for them.

The latter is most definitely the case with John Carney's Once. Ever since it first hit theatres back in 2007, people have been falling in love with it. (More so since it's recently been turned into a Broadway musical.) I wanted to see what enamored the viewers so much. I got my answer quite quickly.

It's not a flashy film in any regards. Glen Hansard and Marketa Irglova, the film's stars, weren't well known prior to Once. (Cillian Murphy was initially cast but dropped out.) To sum things up, Once proved you don't need big names to make a film like this.

And the music. Oh, the music is just magic. The songs are just beautiful. But special mention has to go to "Falling Slowly", which rightfully earned that Best Original Song Oscar. It's just absolutely lovely.

Once is one of those films that doesn't need a big, flashy cast to prove how great it is. (Same can be applied to a complex plot and sex scenes galore.) It's a simple film, yes, but it's a very lovely one. Now if you'll excuse me, I need to get tickets for that Broadway show...

My Rating: *****
Posted by MovieNut14 at 9:44:00 PM
Email ThisBlogThis!Share to TwitterShare to FacebookShare to Pinterest
Labels: 2000s, movies, reviews