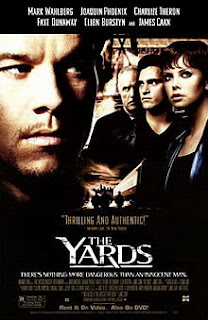 When we first see Leo Handler (Mark Wahlberg) at the beginning of James Gray's The Yards, he's glaring at a police officer on the subway. (We later find out he just got released from prison.) In scenes afterwards, it's clear that he's struggling to re-adjust to everyday life.

His friend Willie Gutierrez (Joaquin Phoenix) suggests he work for Frank Olchin (James Caan), the owner of a railway car repair company (and Leo's uncle). It doesn't take Leo long to discover that the business is a very dirty one, filled with bribery, backstabbing and even murder.

The transformation of Leo throughout the duration of The Yards is something that must be seen to be believed. He goes from a baby-faced kid to a man hardened by the brutality of life. Willie in turn goes from a confident smooth talker to someone who fearfully looks over his shoulder constantly. And Wahlberg and Phoenix are the ideal actors for these roles.

I have a sneaking suspicion that Gray made The Yards with The Godfather in mind. (The most telling suggestion is that Caan is part of the cast.) The work of the recently departed Harris Savides is reminiscent of what Gordon Willis did for Francis Ford Coppola's film. Whether Gray did or not, I still like that little touch.

The Yards essentially confirmed that Gray is now a director I'm keeping an eye on. I didn't love it as much as Two Lovers and We Own the Night, but I did deeply admire it. The cast, which also includes Charlize Theron, Ellen Burstyn and Faye Dunaway, is fantastic. You just don't find films like this nowadays, do you?