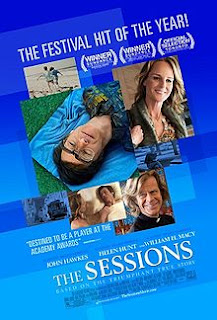 With all of the bug name studio Hollywood releases focusing on explosions, bad jokes and cheap scares, it's nice to see the smaller independent studios making films about the simplicity (or the complexity) of human nature. I'll take one of those over a Hollywood shoot 'em up any day.

Ben Lewin's The Sessions is one such film. Revolving around Mark O'Brien (John Hawkes), a sex surrogate (Helen Hunt) and his priest (William H. Macy), the film provides a mature portrait of disability, sex and love.

I admire the way both Lewin and Hawkes depict O'Brien. They don't depict him as a deformed pariah to society or as a man angst-ridden by his condition. They depict O'Brien as a great mind trapped in a damaged body. It's definitely more tasteful than other depictions of disability (physical or mental) I've seen.

Now onto the two co-stars. Hunt (who looks great for 49, I must admit) provides the spirit of the film with her subtle performance. Macy in turn gives the film its comic relief. The heart of The Sessions, unsurprisingly, is Hawkes. I can see why Hunt was nominated; I don't understand how Hawkes wasn't equally nominated.

The Sessions is a very charming film, but there was something that kept me from loving it. I'm not sure what it was, but I sense I'll pick it up on a re-watch. The scenes between Hawkes and Hunt are quite lovely and very reminiscent of the couples of Hollywood past. This is the kind of film I encourage others to see.

My Rating: ****1/2
Posted by MovieNut14 at 11:39:00 PM
Email ThisBlogThis!Share to TwitterShare to FacebookShare to Pinterest
Labels: 2010s, movies, reviews