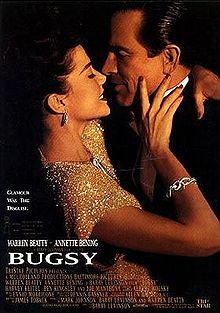 Martin Scorsese's Casino focuses on the fall of Las Vegas, Sin City being reduced from gangster mecca to tourist trap. Four years earlier, Barry Levinson made a film about the rise of the city, transformed from barren desert to illuminated enterprise.

The film is Bugsy, which is about gangster Benjamin "Bugsy" Siegel (Warren Beatty). Siegel wasn't as deadly as Al Capone nor as smart as his associates Meyer Lansky (Ben Kingsley) and Mickey Cohen (Harvey Keitel), but he was smart enough to get by. (Sort of.)

Siegel was also a womanizer, so casting Beatty was a smart decision. The film doesn't shy away from Siegel's violent temper either. Beatty portrays Siegel as ruthless but is willing to show his damaged side. Siegel makes it clear he wants to be remembered for something big.

Levinson makes Bugsy look like it's from the 1940's. Unlike Bonnie and Clyde, the other gangster film starring Beatty, violence isn't glorified though it is just as bloody. It's in a similar style as Francis Ford Coppola's The Godfather, right down to the sepia tones in the cinematography.

Bugsy is very good. The best work came from Beatty and a firecracker Annette Bening (husband and wife once production wrapped). In fact, a double feature of this and Casino would be pretty sweet.

My Rating: ****1/2
Posted by MovieNut14 at 8:35:00 PM
Email ThisBlogThis!Share to TwitterShare to FacebookShare to Pinterest
Labels: 1990s, movies, reviews