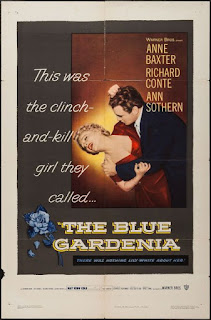 Several minutes into Fritz Lang's The Blue Gardenia, and we watch Norah Larkin (Anne Baxter) preparing a birthday dinner for herself. She had recently gotten a letter from her fiance from overseas (he's serving in the Korean War) so she's got a spring in her step. But her happiness is quickly deflated when the letter tells her he's leaving her for a nurse that treated him.

Devastated, Norah goes to drown her sorrows at the titular restaurant with womanizer Harry Prebble (Raymond Burr). The next morning, she wakes up to a splitting headache, the events of the previous night a complete blank. And then news breaks of Harry's murder...

Lang was having a good year in 1953. As well as The Blue Gardenia, he also had The Big Heat released. And as he previously showed with M and Scarlet Street, noir was where he excelled. (Perhaps deploying some tricks he learned before leaving his native Vienna?)

And while she's known as the conniving titular character of All About Eve, Baxter was more than capable of playing vulnerable women. (After all, she won an Oscar for doing such a role in The Razor's Edge.) Her Norah is constantly on pins and needles following that night, fearing that she might be the one responsible for Harry's death. But is she?

The Blue Gardenia further the belief that Lang is one of several names synonymous with film noir. With ominous lighting and shadows doing the same, Lang also captures a public that's morbidly drawn to bloodshed and the kind of press it can conjure up. (The man sure knew how to make a picture, huh?)