Born to Be Bad 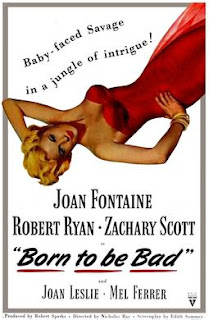 Many of the roles Joan Fontaine played throughout her career could be best described as mousy. Whether it's her collaborations with Alfred Hitchcock or any of her films following them, it became a sort of typecasting for her. Granted, as is often the case with actors, sometimes there's a want for change.

Now Fontaine actually subverts her usual character type for Nicholas Ray's Born to Be Bad. Her Christabel Caine initially seems to be like the actress' former roles but her true colors emerge once she's settled in. She's not some shrinking violet; she's consumed by her status in society.

Being made the same year as Ray's more prolific noir In a Lonely Place, it's understandable as to why Born to Be Bad isn't as well-known. And admittedly it doesn't have the same quality as the more famous film but regardless of that fact, it's still intriguing to watch it unfold.

And Fontaine has a pretty solid lineup of co-stars for Born to Be Bad. It has the likes of Joan Leslie, Zachary Scott, Robert Ryan (no stranger to noir), and Mel Ferrer, showing that very common aspect with other titles of the 1950s: the star-studded feature. (And Ray himself would partake in that several times over.)

Born to Be Bad may not be top-tier Ray but as he showed with his debut They Live by Night the previous year, noir was where he excelled. And while Fontaine didn't regularly play such roles like Christabel, she's clearly having some fun vamping it up. (It would've been nice to see her in more parts like it.)