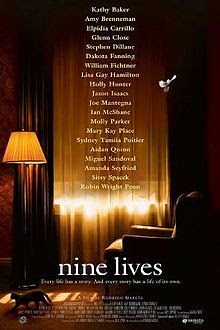 Do you know what one of the problems in Hollywood is? Not enough well-written roles for women. Sure, there are some on television within such shows as Mad Men and Masters of Sex, but it's lacking when it comes to film. It only takes the right person to create an at least decent role for an actress.

Rodrigo Garcia is thankfully one such person. The proof is Nine Lives. A series of, well, nine vignettes, the film focuses on women as their lives take an unexpected turn. Some good, some bad, some life-altering.

The vignettes are similar to the likes of a Robert Altman film in the sense of quality performances from a wide range of actors. But unlike Altman's film, Garcia has his vignettes shot in one continuous take courtesy of cinematographer Xavier Perez Grobet. It's something not normally seen in the average film, but it's certainly daring.

Speaking of the actors, Garcia certainly got an enviable roster of actors for his film. (I mean, just look at the names on the poster.) In their limited screentimes, they all provide top notch performances. Some are better than others, granted, but it's clear that some of the actors are giving career best work.

Yes, some of the vignettes aren't as great as the others, but that doesn't lessen Nine Lives' value. (My personal favorite was "Lorna" with "Diana" and "Sonia" as close seconds.) To be honest, I don't understand why more people haven't seen it. After all, it's a testament of writing and acting at its finest.

My Rating: ****
Posted by MovieNut14 at 6:48:00 PM
Email ThisBlogThis!Share to TwitterShare to FacebookShare to Pinterest
Labels: 2000s, movies, reviews