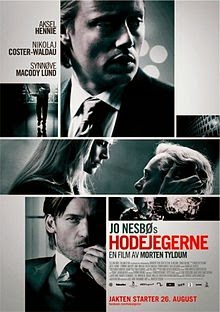 One of the qualms I have with thrillers is that they're too clean cut most of the time. They often revolve around a government conspiracy that gets resolved within the span of two hours. I mean, there have been good ones throughout the years like The China Syndrome and Tinker Tailor Soldier Spy but all of the other ones follow the same formula.

That's why Morten Tyldum's Headhunters is a very refreshing change of pace from some of the more recent thrillers. It doesn't revolve around a mass conspiracy, not in the slightest. Instead, the conspiracy hones in on one person: corporate recruiter/art thief Roger Brown (Aksel Hennie).

But who would put Roger through such an ordeal? The answer is in the form of Clas Greve (Nikolaj Coster-Waldau), the executive of a company. The reason? Well, let's just say Roger didn't exactly make a wise decision in trying to rob Clas. (Certainly not the wisest thing to do if you just met the guy.)

What Tyldum does throughout Headhunters is he builds suspense at a steady pace. Usually films of this nature reveal too much or not enough in the short amount of time they have. But Tyldum uses the right amount of build-up for his film and boy, does it work.

Headhunters is one damn good film. Tyldum weaves a story that gets more and more fascinating as it unfolds. I wonder what Tyldum has in store for his next film...

My Rating: *****
Posted by MovieNut14 at 10:38:00 AM
Email ThisBlogThis!Share to TwitterShare to FacebookShare to Pinterest
Labels: 2010s, movies, reviews