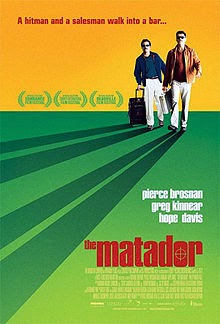 There are always those actors who have that one role casting a shadow over their careers. Sometimes they're stuck with that role forever looming over them, but the wise ones shy away from projects that resemble their famed role.

An interesting example is in the form of Pierce Brosnan. As most people know, he played James Bond during most of the 90s. And by all accounts, he's managed to escape the shadow of Agent 007. But that doesn't mean he's not willing to do a role with shades of Bond as proven by his work in Richard Shepard's The Matador.

In that film, Brosnan plays Julian Noble, a professional assassin in the midst of a midlife crisis. After meeting Denver businessman Danny Wright (Greg Kinnear) while in Mexico, they form a sort of kinship...even though Danny's taken aback by Julian's line of work.

Much like Shepard's upcoming film Dom Hemingway, The Matador shines the lead character (one who partakes in an illegal profession) in a very sympathetic light. It's clear that Julian is a very flawed (and sometimes fucked-up) person. Conscience: it can screw you up sometimes.

The Matador is a very funny film but at the same time, it's a quiet character study as well. Brosnan and Kinnear are hilarious together. (I sort of want them to do another film.) SO be sure to see The Matador (and Dom Hemingway when it gets released).

My Rating: ****1/2
Posted by MovieNut14 at 11:30:00 PM
Email ThisBlogThis!Share to TwitterShare to FacebookShare to Pinterest
Labels: 2000s, movies, reviews