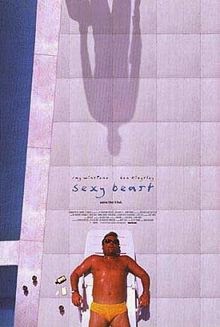 Within the opening moments of Jonathan Glazer's Sexy Beast, the viewer watches as Gary "Gal" Dove (Ray Winstone) sunbathes under the Spanish sun...and almost gets crushed by a falling boulder. That alone implies what's in store for Gal.

Admittedly, Sexy Beast is different from Glazer's later films Birth and Under the Skin in the way of aesthetics. That said, there are some shots in Sexy Beast that would be synonymous with Glazer's style. They're subtle but if you've seen Glazer's other films, you'll be able to catch them.

Likewise, the premise isn't exactly an original one (a criminal is recruited to do one last heist) but both Glazer and the actors make it fresh for the most part. Again, it's a premise that's been done countless times throughout the years but at least they've tried.

Anyway, onto the performances. Winstone is clearly the support for a bulk of the film, but the main attraction of Sexy Beast is definitely Ben Kingsley. He's violent, he's foul-mouthed, he's short-tempered, he's off the fucking wall. (And this is an actor who played Gandhi, for Christ's sake.)

Sexy Beast certainly grabs the viewer's attention for most of it, but it sort of loses steam in the third act. Still, it's worthy of a look if mainly for Kingsley's performance and Glazer setting the foundation for his career as a Hollywood director.

My Rating: ****
Posted by MovieNut14 at 11:10:00 PM
Email ThisBlogThis!Share to TwitterShare to FacebookShare to Pinterest
Labels: 2000s, movies, reviews