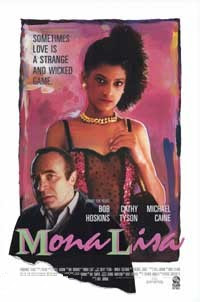 Neil Jordan, from what I've been told, is an eclectic director. He's done crime, romance, historical dramas and everything in between. So as a newcomer to his work, I wondered which film would be best to start with.

I opted for Mona Lisa, his third film. It has many elements found in a number of dramas from the 1980s: good story, strong actors and a nice backdrop. And, of course, solid directing. So I figured I'll give it a chance.

What I got was a film chronicling a man's descent into the London underworld. The man in question is George (Bob Hoskins), who was recently released from prison. He's now a chauffeur for prostitute Simone (Cathy Tyson), a job given to him by his former boss Denny Mortwell (Michael Caine). George's descent gets pretty grim after a while.

The main focus of Mona Lisa has to be Hoskins' performance. He can be reserved one minute then having an outburst the next. It's George's trigger temper that makes Hoskins' work pay off. You don't what will set him off or when. He keeps you on your toes just watching him.

Hoskins' performance aside, there's not much else in Mona Lisa that stood out for me. I did like Jordan's direction, so I'll certainly be checking out some of his other work. But apart from that, not much happens in the film. I still liked it though.

My Rating: ****
Posted by MovieNut14 at 11:47:00 PM
Email ThisBlogThis!Share to TwitterShare to FacebookShare to Pinterest
Labels: 1980s, movies, reviews