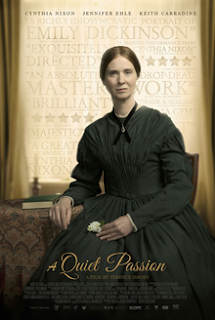 Early on in Terence Davies' A Quiet Passion, it's established that Emily Dickinson was way ahead of her time. She expresses little interest in being pious or a dutiful wife. Instead, much of her time is devoted to her poetry (even if it's published anonymously) and speaking her mind.

As Davies also showed with The House of Mirth and The Deep Blue Sea, A Quiet Passion shows how the fair sex was anything but. While Lily Bart lost her social standing and Hester Collyer the men she loved, with Emily she loses those close to her be it through marriage, death or her own sharp tongue. In short, it seems that Davies is fascinated by imperfect women leading tragic lives.

That's not to say A Quiet Passion is a somber picture from beginning to end. There are exchanges throughout Davies' script that would make the likes of Jane Austen and Oscar Wilde proud. (Speaking of which, why hasn't Davies adapted Austen yet?) It's a point driven home further with nearly every line from Vryling Wilder Buffum (Catherine Bailey).

Back to Cynthia Nixon for a moment. More associated with Sex and the City, she has in recent years proven her worth beyond the cult television series. And her work in A Quiet Passion continues to solidify this claim. Hopefully it's a performance that won't be forgotten in the years to come.

A Quiet Passion is a portrait of a woman whose self-isolation both influenced and crippled her work. As Davies also showed with The Long Day Closes, he shows one's contained life of simple pleasures, unrequited desires and familial bonds (the level of closeness varying between the works). But all in toll, it's a story of someone with immense loneliness.

My Rating: ****1/2
Posted by MovieNut14 at 9:59:00 AM
Email ThisBlogThis!Share to TwitterShare to FacebookShare to Pinterest
Labels: 2010s, director: Terence Davies, movies, reviews