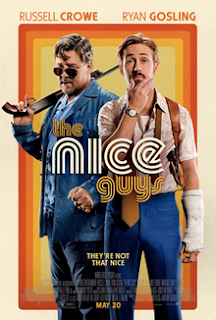 Ah, the crime caper. A genre that only a select few can do well. Such a work requires an even balance of comedy and action, a formula of a certain difficulty to some. However, there has been one name that's made the genre his own.

That person is Shane Black. When someone has titles like Lethal Weapon and Kiss Kiss Bang Bang, it's clear that he has a firm grasp of what's to be expected from the genre. So how has he done with his latest The Nice Guys? Well, one thing's for certain: eleven years may have passed but Black's knack for writing hasn't dulled since his directorial debut.

With elements borrowed from the likes of The Long Goodbye and Night Moves (to name a few), The Nice Guys captures the essence of the 1970s amid the plot of various mysterious occurrences. And as is the situation for the genre, these supposedly unrelated instances have a tying factor.

As perhaps the most unlikely of duos (at least at first glance) are Russell Crowe and Ryan Gosling. Now the combination of these two actors sounds strange at first but this is a Black film after all, so he knows how to coax out solid interactions between the two. (That's inevitable to be honest.)

In some ways, The Nice Guys surpasses Kiss Kiss Bang Bang when it boils down to humor. Thanks to the chemistry between Crowe and Gosling (as well as Angourie Rice basically stealing every scene), it's one of those comedies that will hold up in the years to come. (However, hopefully Black will improve the female characters in his films.)

My Rating: ****1/2
Posted by MovieNut14 at 3:53:00 PM
Email ThisBlogThis!Share to TwitterShare to FacebookShare to Pinterest
Labels: 2010s, movies, reviews