BOOK VS MOVIE: Ship of Fools 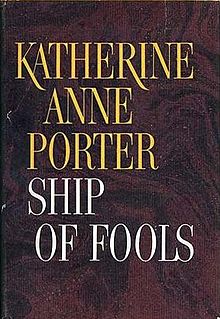 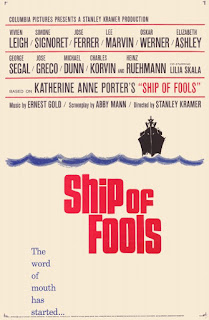 So where does Ship of Fools fall? Focusing on the first-class passengers on a ship from Mexico to Europe, it chronicles their stormy pasts and uncertain futures. Set in the years before the start of World War II, it foreshadows the chaos that would consume the world with hate and violence.

Katherine Anne Porter's novel also focuses on other matters like racial and religious differences. A number of characters voice their opinions on the various ethnicities on board (read: they're openly racist) but this was written during a time of social change so Porter gets an exception in this regard. (Hey, literature gets away with a lot of things.)

Being made during the last few years of the Hays Code's existence, Stanley Kramer's adaptation is decidedly more cleaned up in comparison to Porter's novel. (At least with race and religion; it focuses way more on sex.) Boasting an all-star cast (including Vivien Leigh in her last film role), it's sort of like Grand Hotel set at sea. (An odd combination, perhaps, but it's true.)

Which is better? On the one hand, Porter explores the various complex lives of the passengers. (She also writes about prejudice without getting preachy.) But on the other hand, Kramer's film is decidedly easier to follow. (It also has more happier resolves than what Porter wrote.) Both have their triumphs and flaws so it appears there's one possible solution.

What's worth checking out?: The movie.
Posted by MovieNut14 at 10:25:00 PM
Email ThisBlogThis!Share to TwitterShare to FacebookShare to Pinterest
Labels: book vs. movie, director: Stanley Kramer, reviews