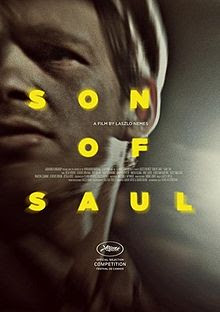 The Holocaust has been the focus of various pieces of fiction over the years. Indeed, by this point, it's gotten to levels of over-glorification. (The deaths of innocent people shouldn't be reduced to something for dramatic purposes.) However, there can be exceptions if it focuses on said innocent people effectively.

Such is the case for Láslzó Nemes' Son of Saul. Many would reserve making a film of this nature later on in their careers. Not for Nemes. With this being his first feature-length work, Nemes shows a harrowing glimpse into one of history's biggest atrocities.

Much like what Vittorio De Sica did with Bicycle Thieves, Nemes doesn't have a professional actor in the lead role. In Nemes' case, he has poet Géza Röhrig starring in his film. Does this fact affect the quality of the film? Of course not. After all, no one was complaining about it when De Sica did it. (Well, aside from perhaps David O. Selznick.)

Here's another interesting detail of Son of Saul. Many of the shots are tight close-ups of Röhrig. Very seldom does the camera focus on any of the horrors within the concentration camp. The most that the viewer gets is a glimpse of the terrified prisoners or the sounds of their blood-curdling screams. Was this Nemes' idea or that of cinematographer Mátyás Erdély? Regardless of whose decision it was, it makes the film more gripping to watch.

Son of Saul is a deeply promising debut from Nemes. This is a film that doesn't pull any punches, the kind of film that we only get once in a blue moon. It easily joins the ranks of Requiem for a Dream, Leaving Las Vegas and United 93. (Once you see Son of Saul, you'll understand why those films specifically.)

My Rating: *****
Posted by MovieNut14 at 9:59:00 PM
Email ThisBlogThis!Share to TwitterShare to FacebookShare to Pinterest
Labels: 2010s, movies, reviews