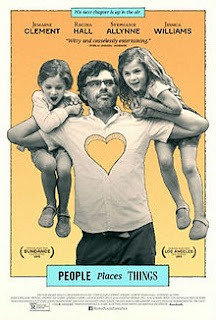 Ah, August. That time in the year where studios basically dump their remaining films for the summer. Most of the time they're usually action and horror movies that got little to no publicity whatsoever. But often times this is where smaller productions (regardless of quality) get released. More often than not, some good titles go unnoticed.

One such title is James C. Strouse's People Places Things. As is the case with most indie features, the film doesn't boast many big names. (Unless you've seen your fair share of cable TV.) But does that weaken the film's charm? Of course not.

What People Places Things also does is paint a portrait of life after a personal failure. You think life can't go on after losing someone dear to you but it's far from that. Sometimes all it takes for things to get back in order is a gentle nudge.

Between a summer of blockbusters and awards season, it's nice to have something that's more of a breath of fresh air. It's an escape from the last few months of moviegoing fare, and it's something that one should seek out when you have the chance. It's a charming little film.

My Rating: ****
Posted by MovieNut14 at 8:17:00 PM
Email ThisBlogThis!Share to TwitterShare to FacebookShare to Pinterest
Labels: 2010s, movies, reviews