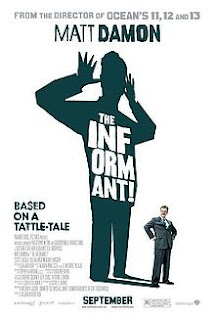 Steven Soderbergh's The Informant! is decidedly different from other films of a similar nature like Michael Clayton and A Few Good Men. Sure, it looks like them but its mood is clearly more upbeat as the film wears on. Granted, in a dark way but still.

Indeed, the film is based on real events but it's not your average ripped from the headlines story. As the details begin to unfold, it becomes less about the crime a corporation is committing and more about the erratic behavior of the man trying to expose it. It swiftly becomes something that sounds like it's straight out of the tabloids.

The man in question is Mark Whitacre, played here by Matt Damon. He's a man who lives a rather regular life: good job, steady marriage, things like that. But as his involvement in trying to expose the scam further, it's clear that there's more to Mark than he's letting on. And Damon gives a performance with an air of odd curiosity.

There's an element in The Informant! that at first glance makes very little sense. The incoherent narration makes the viewer wonder why it's even there in the first place. But then there's a solid explanation much later on, and everything just clicks. It's a small detail but an effective one in Soderbergh's hands.

The Informant! is a mature comedy, something not frequently seen nowadays. (And considering the many comedic actors amongst the supporting cast, that's saying something.) And knowing how bleak Soderbergh's other films can get, it's nice to see something with some humor.