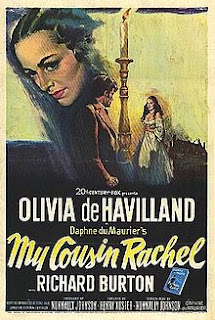 Henry Koster's My Cousin Rachel is different from most costume dramas of the time. Rather than focusing on a romance of some sort, it's a fine thriller.

In a sense, My Cousin Rachel is sort of a reversed Jane Eyre. It focuses on a mysterious person and another person who falls madly in love with them. Just keep that in mind as you watch it.

In his first Hollywood production, Richard Burton makes one hell of an impact. As Philip Ashley, he showcases a bravura that can be manipulated by the right kind of person. His performance is also the foundation of many great performances to come.

As the title character of Rachel Sangalletti, Olivia de Havilland possesses a side of her acting ability that no one had seen before My Cousin Rachel. de Havilland at that time was known for playing the good girl. Here, she's in a darker role. And I must say, it's a great one.

My Cousin Rachel is a great movie. It starts off rather slow, but it picks up just as quickly. Burton and de Havilland give some of their best performances within this film. And to think this is was made by the same man responsible for Harvey.

My Rating: ****1/2
Posted by MovieNut14 at 10:34:00 PM
Email ThisBlogThis!Share to TwitterShare to FacebookShare to Pinterest
Labels: 1950s, movies, reviews