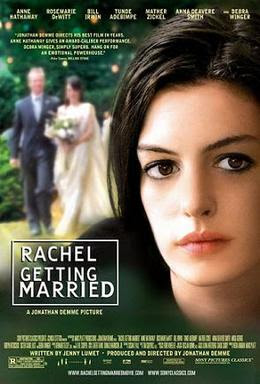 Don't you love it when an actor does a role outside of their normal work? Take for example Anne Hathaway. She started out with light movies such as The Princess Diaries, but after her supporting work in Brokeback Mountain she has been doing more serious work.

Kym Buchman (Hathaway) has left rehab to attend the wedding of her sister Rachel (Rosemarie DeWitt). Bu tensions between Kym and the rest of her family reignite upon her arrival.

Last year I was lucky enough to see Sidney Lumet and his daughter Jenny (who wrote Rachel Getting Married) speak at Lincoln Center. Jenny said she wrote one scene of Rachel Getting Married after a real-life event. The scene in question is the dishwasher scene. She said she based it off something similar that happened between her father and Bob Fosse.

Hathaway shows good promise for her career with her work in Rachel Getting Married. The rest of the cast is also very good. Johnathan Demme, who also directed The Silence of the Lambs and Philadelphia, gives us a view of a dysfunctional family that slowly gets back together after a wrench gets thrown at it.