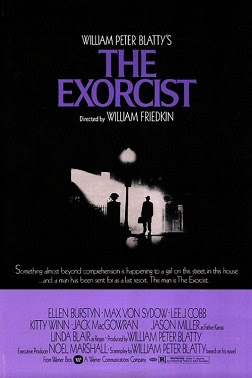 William Friedkin is one of the few directors to have had back-to-back hits. Those were The French Connection, for which he won an Oscar, and The Exorcist, where he scared the hell out everyone back in 1973.

Actress Chris MacNeil (Ellen Burstyn) starts to notice some unusual changes in her daughter Regan (Linda Blair). She seeks help from Father Karras (Jason Miller), who is losing his faith. The top priest who can deal with an exorcism is the aging Father Merrin (Max von Sydow), who is called in to rid of the demon inside Regan.

I'll admit The Exorcist didn't scare me as much as it should have but damn, it's really fucked up. It'll screw up your mind, I can tell you that. Blair gives one of the best child performances in film history. I also admire the work from Burstyn and Miller. Friedkin is responsible for directing the most messed up horror movie in existence.