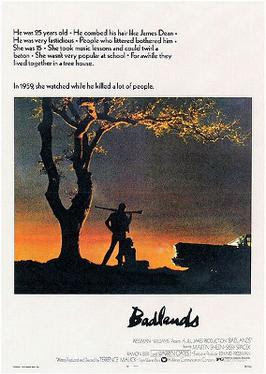 Impressed but not blown away by Days of Heaven and The New World, I was nervous if I was going to like The Thin Red Line. But I was told by a fellow blogger that I should see Badlands before The Thin Red Line otherwise I wouldn't like it.

After murdering her father, Kit Carruthers (Martin Sheen) and Holly Sargis (Sissy Spacek) hit the road and go on a killing spree.

One of the differences that Badlands has and Days of Heaven and The New World don't is that Badlands has a faster pace, something which I like. It's actually based on the  case of Charles Starkweather and Caril Ann Fugate, who were responsible for nine murders back in 1958 (the producers had to change names to avoid a lawsuit from the soon-to-be paroled Fugate). The work from Sheen (whom I almost didn't recognize) and Spacek is very good. Malick has finally captured my interest for his movies. Now I'm really looking forward to The Thin Red Line as well as The Tree of Life, whenever the hell that gets released.

My Rating: ****1/2
Posted by MovieNut14 at 10:08:00 AM
Email ThisBlogThis!Share to TwitterShare to FacebookShare to Pinterest
Labels: 1970s, director: Terrence Malick, movies, reviews