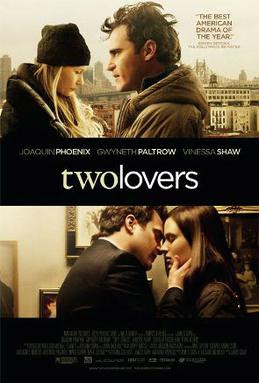 I consider Joaquin Phoenix an underrated actor. I'm saying this because a) his late brother River overshadows him from time to time, and b) his off-screen antics get more publicity than his movies. Remember when he appeared on Letterman?

Leonard Kraditor (Phoenix) has recently broken up with his fiancee and is now living with his parents. The breakup has left Leonard a suicidal man. He meets two women: Sandra (Vinessa Shaw), the daughter of his father's business associate, and Michelle (Gwyneth Paltrow), his self-destructive neighbor. Sandra wants to take care of Leonard, while Leonard wants to take care of Michelle.

Phoenix is known for acting in dark movies and this is no exception. He gives an emotionally devastating performance in Two Lovers. Paltrow, who has recently been doing a number of "whiny female" roles, gives an impressive performance. It may have been ignored upon its release, but it's not one you should miss.