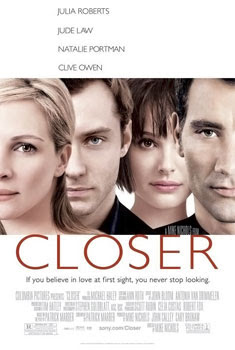 Mike Nichols has to be one of the most esteemed director in the entertainment industry. He is one of the few people to have Oscar, Tony, Emmy and Grammy wins, a feat only nine other people have accomplished.

Alice Ayres (Natalie Portman) meets mediocre obituary journalist Dan Woolf (Jude Law) and they become a couple. He meets photographer Anna Cameron (Julia Roberts), then "introduces" her to dermatologist Larry Gray (Clive Owen). Larry and Anna marry, but she and Dan are having an affair, much to the dismay of Alice and Larry.

Since the movie revolves around sex, you would expect an overflow of it considering Nichols directed Carnal Knowledge thirty-three years earlier. But thankfully, we are spared that. Closer has one of the best ensemble cast I've seen. Owen and Portman give the strongest performances, though Law and Roberts are very good too. This is only the third movie by Mike Nichols I've seen (the others are The Graduate and Charlie Wilson's War), but I know enough that he is a very good director. One of Nichols' best.

My Rating: ****1/2
Posted by MovieNut14 at 9:17:00 AM
Email ThisBlogThis!Share to TwitterShare to FacebookShare to Pinterest
Labels: 2000s, director: Mike Nichols, movies, reviews