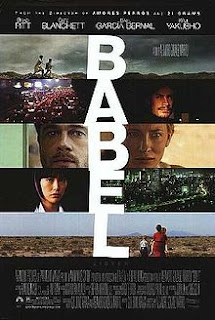 Usually when I choose a movie to watch, the plot has to be appealing to me. That's the main requirement.

Richard (Brad Pitt) and Susan (Cate Blanchett) are a troubled married couple on vacation in Morocco trying to work out their differences. While on a tour bus, Susan is shot by an unseen assailant. Their story is connected with Mexican nanny Amelia (Adriana Barraza), the two boys responsible for the shooting and a Japanese businessman whose deaf daughter Chieko (Rinko Kikuchi) longs for affection.

Hmm, another movie focusing on people with different lives but they're somehow connected. Apologies if I sound negative, but the "interwoven storyline" seems a little...cliched. But that doesn't make Babel a bad movie. In my humble opinion, Kikuchi gives the best performance. The movie definitely has a gritty feel to it. Babel also captures the struggles on each individual nationality.

My Rating: ****1/2
Posted by MovieNut14 at 10:31:00 AM
Email ThisBlogThis!Share to TwitterShare to FacebookShare to Pinterest
Labels: 2000s, director: Alejandro González Iñárritu, movies, reviews