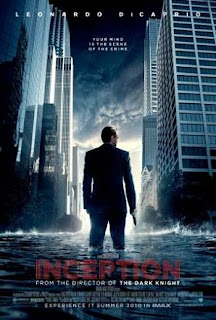 Damn, Nolan. You have yet to disappoint me.

Dom Cobb (Leonardo DiCaprio) is a thief who is an expert in stealing secrets from a person's subconscious. The job has put a strain on his personal life, but his final job -- where he plants an idea rather than steal it -- may be a redeeming moment.

I got two words to describe Inception: HOLY SHIT. This blew me away. Everything works together perfectly: the acting, the story, the visual effects, the music, EVERYTHING. This beat my expectations by a mile. And the fact I saw it in IMAX (which nearly made my head explode from the sheer epicness) made it more astonishing. The originality of the story saves us from a summer of sequels, remakes and just downright bad movies. And yes, I'm aware a majority of this review makes me sound like a fangirl.

My Rating: *****
Posted by MovieNut14 at 9:47:00 AM
Email ThisBlogThis!Share to TwitterShare to FacebookShare to Pinterest
Labels: 2010s, director: Christopher Nolan, movies, reviews